This foundation was set up due to the very evident and undeniable critical situation that humanity has arrived at.  In the last 50 years humans have brought the planet's balance, stability and harmony to an unprecedented disruption that has never been recorded before in history and that can put us on the verge of our very own extinction.  There are different elements and aspects involved that become more complex as the fundamental principles and harmony are violated.  Then the complexity of problems are expanded to such a degree that they become immensely complicated and they have started to reach all aspects and levels of our human society

This complexity is, in essence, the very cause of the whole crisis we are in and all the things we see which affect humans on all levels: mental, psychological, physiological, economical and on many other levels.  This is simply because the essential principles of subsistence have been violated, namely, the fundamental harmony that is maintained between the forces of the cosmos and nature and the actions done by humans. Humankind is facing a global disruption on all levels since such a great deal of disharmony has already compromised the most basic balance in nature and in the environment on which we all fully depend.  This Traditional Knowledge, in essence, are the principles and set of guidelines to hold, harmonise and keep a minimum balance with the Creation, has been neglected and ultimately dishonoured and with it all the wise ways that once upon a time some of the humans were able to observe and behave accordingly.

In this process the natural resources are overexploited and abused to such a degree that is practically irreversible.  The outrageous, irresponsible ways in which things are being abused are in such disproportion that it does not give the space and room for the forces of Nature to balance, renew and regenerate with the same speed in which things are consumed and destroyed.  Members of the foundation came to the conclusion that, unless serious and effective actions are taken, the chances of reversing these immense consequences and implications are very narrow.   The questions still are: "Do we have a chance to take effective actions to help Nature to recover the minimal regenerating force before it is too late?  Can we still retake the most simple fundamental principles to bring about the most essential elements absolutely indispensable to create order?"

The amazing amounts of disasters happening all over the world are not just the natural actions of the forces of Nature.  Instead, they are the effect of the very offensive energy and wrong interactions that humans have created and that have caused powerful reactions in the forces of the Cosmos and Nature, which are only trying to compensate the mess in the form of tornados, earthquakes, fires, floods, slides, droughts, epidemics, massive diseases, contamination and other ways that we can't even imagine with devastating consequences.

KOGINKA SEWALUNA FOUNDATION ALBION exists to retake these wise ways of conservation and land management and bring light to the necessity of these things that are fundamental to avoid collapse of our ecosystems and our environment as we know it. And to be proud of the legacy we will leave for the next generations: our own children.

'"Sacred Reciprocity is the essence of harmony, balance, order and integrity. It originates in the divine resonance of perfect affinity and empathy that permeates the entire universe. From that source Original Knowledge and pure creativity bloom!

This is how the divine flow of Sacred Reciprocity works in such perfection at all levels and in all dimensions.

The Maker, the Doer, the Giver and the Taker are one in ONENESS because of Sacred Reciprocity…" 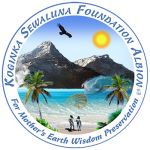 there's more to come, this website is in the weaving... 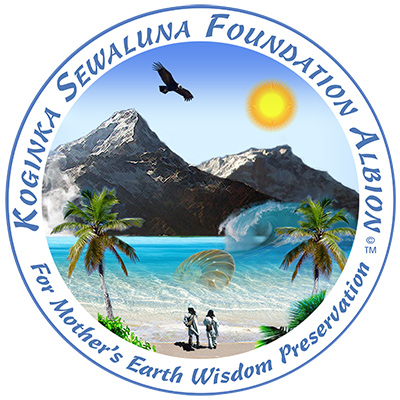